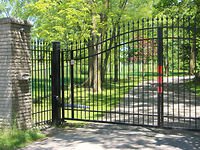 One is that Christian faith is all about words you need to say. The other one says it’s all about deeds you do.

Jesus says people will come to him and say, “Lord, Lord”

Those are good words. Lord denotes respect and honour for Jesus.

There is a connection to God’s name in the Old Testament. They even say it twice – this is no lazy acknowledgement.

But the motivation for saying these words is wrong. They are using good words like a password to get through the gates to heaven.

Some act as if knowing the correct password gets you into heaven. Some think there is a particular prayer you have to pray, and that’s all that matters.

That’s a misunderstanding because it makes it seem as if a magic, superstitious incantation is all God needs from us. That would mean we can do what we want – we could believe that we’ve already bought our ticket to heaven, so who cares what we do until then! But this is not true.

It would also mean Christians could manipulate people to make them say words out of fear that they don’t understand or follow through on.

It would also lead to some ridiculous deathbed confessions…where we could try to get people to say those words before they die, or people could delay saying them as long as possible until they were at death’s door.

Now, it’s indispensable to say Jesus is Lord. To avoid those words is to say I don’t want to live in his kingdom, heaven, where he’s Lord. Verbally confessing Jesus is critical. But that’s not all there is to following Jesus.

Tomorrow, we’ll see another perversion of Christian faith. Then on Thursday, we’ll see what Jesus taught it was really all about.

Question: If Christian faith was just about saying the right words, how would this contradict what Jesus said earlier in the Sermon on the Mount, or elsewhere?