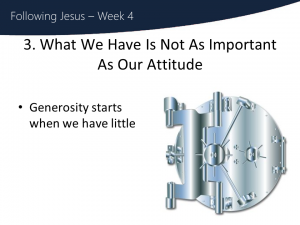 Peter Marshall, who was chaplain of the United States Senate for many years, shared this true story:

There was a man who struggled to tithe even though he had a large income. The man said to Marshall, “I have a problem. I used to tithe regularly some years ago, but…but now…I am earning $500,000 a year, and there is no way I can afford to give $50,000 to the church.” Marshall reflected upon this wealthy man’s dilemma, but gave no advice. He simply said, “I can certainly see your problem. Let’s pray about it.”

The man agreed. So Marshall bowed his head, and prayed with boldness and authority: “Heavenly Father, I pray that you would reduce this man’s income back to the place that he can afford to tithe. “

The time to learn giving is when we have a little. It becomes increasingly difficult as our prosperity increases…remember those cords around our hearts. 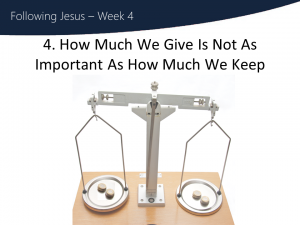 One day as Jesus sat in the temple with his disciples people came by with their offerings for the temple. Some of the people were quite rich, and they made sizeable donations. Among them was a poor widow who dropped in her gift of only a few pennies. Perhaps someone laughed…Jesus pointed out that this widow had actually given more than all the others.

Seeing their surprise at his remark he explained that all the others given from their wealth. They still had lots left. But this woman had given out of her poverty. She had nothing left. In the eyes of God her gift amounted to more than theirs. God evaluates things differently from the way we do. In this matter of financial stewardship it is important for growing Christians to remember how much we hold back is far more important than how much we give.   Once again the issue comes back to whether or not we will allow Jesus to free us from the power of money and are we willing to trust God.