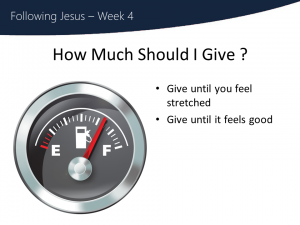 Probably ask – what percentage is right? Perhaps you’ve heard of a tithe before.

There are several places in the Bible that talk about tithing—which literally means giving 10% to God’s work. It’s ssomething from the Old Testament, when God’s people, the Israelites, were to give 10% of everything to God – crops, animals, everything.

Now I am not convinced that the biblical standard for followers of Jesus is 10% – and I’m not going to tell you this is the law for you. For some that will be just impossible to maintain, for others it will hardly be a challenge.

Some choose to give 10% today, but it’s important to recognize that it would be easy to forget about grace, and start giving a certain percentage because of law. For Christians, we want to be doing everything, including our generosity, out of love for others and God, not out of fear we won’t hit a magic number, or pride that we have.

Why? First, Jesus, or the entire New Testament, never say Christians should give 10%. Just the Old Testament.

But we have to remember how Jesus treats many Old Testament laws – he steps them up and makes them more challenging to our hearts.

He says his disciples’ “Righteousness is to exceed that of scribes & Pharisees. – Matt 5:20

For example: The Pharisees and scribes avoided murder (one of the 10 commandments)…so Jesus wants his followers to not only never murder, but to also avoid anger. He shifts them from doing the bare minimum, to an actual change of attitude.

In the same way, if the Pharisees give 10% because they have to, what do we give if Jesus always calls us to have a change of attitude?

It’s to give, not until it hurts, but until it feels good again…until our attitude has changed from one of giving what we have to, to one of giving generously, because we love to give.

Proportional giving has nothing to do with meeting the current needs or budget of the church, but it starts with the giver’s capacity to give, whether they are of great or little needs.

How do you choose your level of giving? Only you can decide, but identify where you are today, and challenge yourself to the next level…today, not tomorrow. Jesus always said those who were faithful with a little, are the ones he trusts to be faithful with a lot, so start where you are, no matter your income, no matter how little it may seem, because if you give generously out of love, it’s important to God.

Just to be clear – I’m not just saying this to boost our church’s offerings! I am encouraging you to give generously to God’s work – whoever, wherever, however it is done. So long as it is work consistent with God’s plans for this world – so long as it is kingdom work. This church is a great way to do that – we are part of great work happening right here in this building, in the neighbourhoods around us, and in our city and our world. But God’s work is much bigger than any one person or church!

In the final analysis, stewardship is about the overflowing of a grateful heart in response to all that Jesus has done for us…..and so determine how much to give by determining what God has given and done for you. Then decide how you can say thanks.

There’s a classic Seinfeld episode where Kramer goes on a test drive with a car salesman. Because it’s Jerry buying the car, and Kramer intends to borrow it, he needs to test out how long he can run it without buying gas for Jerry’s car. The salesman and Kramer end up going on this long joyride, and they’re overcome with excitement and fear at once, as they run the car as close to empty as possible. Then just as they’re about to pull into the dealership, realizing they made it, they give it a little bit more. It’s this kind of dangerous, yet exhilarating challenge that God gives us…how little can you keep, and how much can you give? That’s his challenge to us!

He wants us to give until it feels good….frequently we are exhorted by some cause or other to “give until it hurts.” I strongly disagree with this sentiment. It is one thing to be stretched and challenged. But if giving really hurts us then we still haven’t gotten the picture. What we want to do is break through the discomfort zone until we are free. We want to give until it starts to feel good. We want to give until it becomes intoxicating. Remember that we were made to be givers, but we have been socialized by a world that has lost its direction into believing that we are supposed to be keepers.

As in every other area of life, the invitation of Jesus is an invitation to excitement and adventure…like this video illustrates so well!

Question: Assess how much you give today, and to what causes. What percentage of your income is it? Set a stretch goal to increase this. 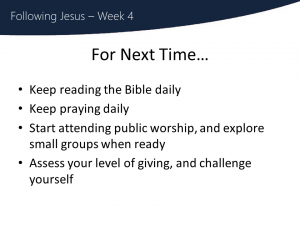