Tips for Reading the Bible:

Pray First—ask that God will speak to you through the Bible, help you understand and give you insight… and that God will give you the strength to act on it.

Get a Bible that you can understand. I know that King James has been in your family for a long time, and looks beautiful, but most people can’t read the Bible every day, and gain a deep understanding of it, without a Bible in modern English.

Today we’ll look at different versions of the Bible. See Pages 37 and 38 of this document: https://biblesociety.ca/files/ebook/pdf/the-bible-explored-short-history.pdf

At one end of the spectrum is a literal Bible, like that Greek New Testament. The other end of the spectrum, on page 28, is a paraphrase Bible. The easiest ones to read are paraphrases, but they’re not terribly reliable as Bibles. To make it really easy to read, they’ve obviously had to change some words and make some expressions and sayings understandable for us. The example I always use is let the bag out of the cat. If Jesus said something about letting the cat out of the bag, then in a literal Bible, they would translate it word for word, this ancient Hebrew expression would be translated, “He let the cat out of the bag.” If that was a really ancient expression, none of us would have a clue what it meant until we went and read some historical notes about it and said, “Oh at means telling somebody something you shouldn’t have told them. I’ve got it. He told the secret.” In a paraphrased Bible it might simply say “Jesus told them a secret he shouldn’t have,” and you’ll never know it had anything to do with cats or bags. 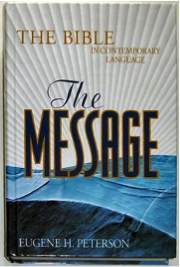 That’s the balance you have to have here. Is it going to be understandable or is it going to be accurate? People have written different Bibles to try to get at the different ends of that spectrum. In the paraphrase end of things, the easiest Bible to understand that you can find is going to be Message. It’s pretty popular because it’s an easy, fast way to read the Bible. If you want to read the Bible like a novel, this is it. It doesn’t even have verse numbers in it. You can’t quote it and say, “John 3:16 says,” because there’s no verses numbers. It’s meant to read like a novel and to be very easy to read.

If you’re just looking to get a sense of the story, who went where and did what when, this is a great way to do it. If you’re looking for a Bible to quote from and to really get into the word of God, this probably isn’t it. It’s easy to read, but it’s not really the Bible. It’s a paraphrase. It’s actually not even translated so much from the original Greek and Hebrew. It’s a paraphrase, so somebody taking an English Bible and trying to make it easy to understand. That’s why it say Eugene Peterson on it. There’s actually an author to this Bible because it’s what he thinks the Bible means. You can’t quote this and say, “The Bible says this.” Well, no, Eugene Peterson says. I trust Eugene Peterson, he’s a good guy, but it’s still not the Bible. Easiest way to read the Bible ever is the Message.

Second easiest, but a little more trustworthy is going to be something like the New Living Translation. The New Living Translation, you’ll see on your spectrum there, is still on the paraphrase end of things, but it’s still translated. It is a true translation from the Greek and Hebrew. They’re doing their best to translate from the original languages but still make it understandable. This is a good one, especially if you’re learning English, and you want to read an English Bible, then something like this is going to be a good translation that you can actually trust and find readable at the same time. 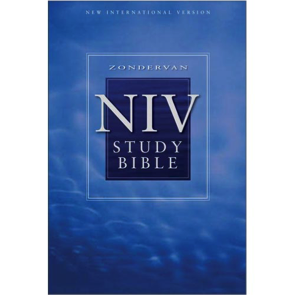 Most people in the world use the New International Version, the NIV, it’s the most popular Bible in the world. You’ll find on that spectrum it’s right in the middle. They tried to balance readability and accuracy, and that’s why it’s so popular because it’s right in the middle. You can trust it, and you can read it. The NIV is very popular. You can pass it around. Yeah, make sure you pass it between both tables, guys. This particular NIV Bible is a study Bible as well. The letters, like NIV, NRSV, all these letter codes, they all refer to the translation of the Bible, the words that are used in the actual Bible. The fact that it’s a study Bible means there are notes at the bottom that explain what you’re reading. When you get to a troublesome part, you can just look down to the note that relates to that verse, and you can see what they might have meant. That’s obviously editorial content. That’s not the words of the Bible. It’s somebody helping you understand them. There are lots of different study Bibles out there. This is one that I recommend and sell here at the course. That’s the NIV, very middle of the road.

You’ll find NIV stuff is really popular, everybody’s got it. Lots of people have made it into audio versions, and things like that. You can get CDs or MP3s, or stream online. 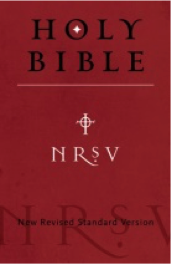 Getting a little more literal and a little less readable is are NRSV, the New Revised Standard Version. Again, a very popular version of the Bible. It’s trying to balance readability and accuracy. It’s trying to balance those things. The one thing it does differently from the NIV, the old NIV anyway, is the NRSV is intentionally gender inclusive when it can be. If somebody writes a letter and says, “Dear Brothers,” the translators at the NRSV are going to say, “You know what, he wasn’t just writing to the boys. He was actually writing to his family in Christ, and although he says brothers, he really means brothers and sisters,” and so they’re go to translate brothers and sisters. It’s not really word for word what they Bible said, it isn’t a direct translation, but they’re trying to say that that’s what they meant. What the author probably meant was brothers and sisters.

There may be times where it’s obvious that he just meant the boys, and that’s different. The NRSV is one of a family of Bibles called gender inclusive. That’s why it’s what we generally will read in Churches during worship services.

Then finally, the most literal Bible I would recommend you actually read in this day and age is the ESV, English Standard Version. It’s relatively new. It’s less than 20 years old, and it’s obviously then got the latest scholarship in it. I find it readable even though it’s actually at the literal end of the spectrum.

Obviously, one of the most challenging Bibles to read is the King James Version because it’s so hard to read, that English, and it’s a very literal translation. Then there are even more literal ones that show you the Greek and Hebrew in line with English and things like that and just translate word for word and are almost completely incomprehensible.

Bottom line: Get a Bible, get a good one you might actually read!

Get comfortable—try and minimize distractions.

After you get a Bible, get comfortable, minimize your distractions, do it at the best time of day for you when you’re alert and able to pay attention to what you’re reading, and set aside that time, keep it sacred for this purpose.

Don’t try to Do Too Much Right Away

Then finally, set a reasonable goal. That’s why I have you starting with little tidbits. Maybe this is way too short for you, these 100 little passages everyday. You’re going to be like, “Oh, it’s so small, I want to read lots.” That’s great. You can build from here, but don’t start big because then you’ll get discouraged, something will happen in life, and you won’t be able to keep it up, and you’ll lose it. Start small, prove to yourself you can do it, and then build on top of that. Then if crisis hits, you’ll be able to drop back to a manageable level rather than just dropping the whole thing all together because you’ve never known any different. Start small. Start reasonable.

Question: What do you hope to gain by reading the Bible?