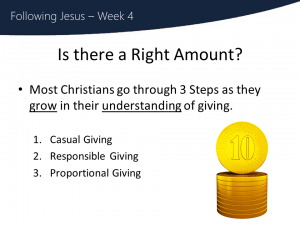 Is there a right amount to give? Three steps many Christians move through as they grow.

But often as we get more involved, our eyes are opened to the trust costs of the church’s ministry.

I know of one person who’d grown up going to church, but as an adult, was asked to join the advisory board. She accepted, and figured it would be a good idea to be at the annual meeting for the first time in her life, since she was on the board now.

Well, the next day, she reported that it was a huge eye-opener. As she saw the budget, she looked at her own giving, and exclaimed, “I just realized I’m the biggest cheapskate here!”

She had just become a “responsible giver”…someone who looks at the budget, and says I’ll do my part of the good work that’s happening here.

I have moved through those stages too…from our days as students throwing a couple dollars on the plate, to when I got more involved in churches, and realized the costs. But then we moved into another step, that of proportional giving.

This is where we don’t just do our part, but instead we looked at our budget, figured out a percentage we would give every month, signed up for pre-authorized giving, and stuck to it. We have plans for our money…work on the house, new roof, etc. but we’ll have to save up for it, because we make sure our tithe comes out first.

Question: Jesus says giving generously can lead to a “life that really is life.” Describe this true life and how it differs from this one.