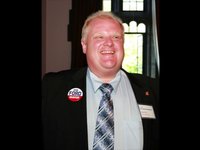 Have you ever felt judged?

According to Psychology Science magazine, it takes just a 10th of a second for us to make snap judgements about character, trust, and competence based on visual first impressions.

When you first heard Rob Ford was accused of using crack cocaine, how did you react?

Many reacted with judgement, having already decided he was “that kind of person”. But according to a poll of people’s support for potential mayoral candidates for the next election, 27% still support him, and that did not change with the most recent allegations. This has a lot to do with prejudices one way or the other.

We make judgements all the time. Is that good, or bad?

Question: How do you react to the idea of judgement? Is it ever okay for someone to judge another? Why or why not?