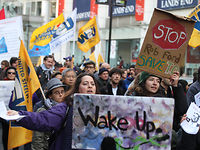 Jesus said this about judgement:

This is one of the best known, but most misunderstood and abused sayings of Jesus.

Often people will quote this passage to suggest Jesus says no one should ever judge anyone else. It makes it seem like Jesus was saying to turn a blind eye to injustice, brokenness, hurt in our world.

One take on why people quote this passage, is that when we see other people hurting, we often love ourselves too much to tell the truth…we want no pain for ourselves so we let others hurt, and use this as an excuse.

Jesus is not saying there should be no courts of law, no one should help another person out of a bad situation they don’t recognize.

How do we know? He judged.

Right in this passage, he spoke about hypocrites. He expected his followers to judge, discern, too. In the Sermon on the Mount, he told them to be more righteous than Pharisees. Later, he speaks about false prophets. He wants his followers to see the difference – to judge.

You can also see, right here in this passage, he commands his followers to engage in judgement: to be aware when there is a speck in someone’s eye.

So what’s the difference, between good judgement and bad judgement? Good judgement is to see truth, then speak the truth in love. A healthy critique based on standards we can both recognize and try to follow is okay.

As Paul said in Romans 14:4: Who are you to pass judgment on the servant of another? It is before his own master that he stands or falls. And he will be upheld, for the Lord is able to make him stand. (Romans 14:4 ESV)

The problem is when people go looking to judge others by standards they don’t keep. This turns to harsh self-righteousness, as if we are becoming the master of others.

We all do it – if someone criticizes us – we will immediately look for a way to criticize them.

Question: What is difference between critique and judgement?