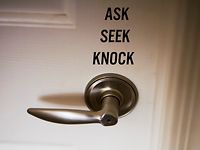 Jesus said this about our needs in life, and God’s care for those needs:

“Ask, and it will be given to you; seek, and you will find; knock, and it will be opened to you. For everyone who asks receives, and the one who seeks finds, and to the one who knocks it will be opened. Or which one of you, if his son asks him for bread, will give him a stone? Or if he asks for a fish, will give him a serpent? If you then, who are evil, know how to give good gifts to your children, how much more will your Father who is in heaven give good things to those who ask him! (Matthew 7:7-11 ESV)

It’s a very poetic part of Jesus’ sermon on the mount, both in its beauty, but also in its depth of meaning.

Yet it’s easily misused or misunderstood. It sounds like a foolproof formula for prayer that he repeats several times. It’s easy to come away thinking God is like a vending machine – put in a prayer, make your selection, and God has to give it to you.

But simple logic says it can’t mean that. We don’t all get what we want all the time.

But Jesus was not saying God was a vending machine, he said God was like a Father. He may not be like your Father, or any other on earth, rather the Father’s love is like the ideal parent, the one that all human parents are measured against.

Only a sick parent would delight in harming their child. When a child needs food – we should try to get them food. Of course, parents don’t give their child every unhealthy threat they request – good parents give healthy food and treats in moderation.

God has not promised to fulfill our wildest dreams of Porsches and Prada. He speaks about our needs…necessities. And not necessarily the modern definition of a need!

Question: How have you personally treated prayer like a formula or vending machine, or seen others do the same?