Thursday - Act On It - Influences 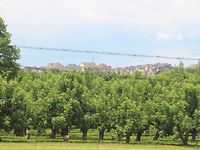 We’re exploring who has influence on our spiritual lives. We’ve seen four tests to identify a negative spiritual influence.

The good news is that Jesus is the one teacher who satisfies the tests he’s just laid out.

Attractiveness. Long before his birth, Jesus was described in this way by the prophet Isaiah: He had no beauty or majesty to attract us to him, nothing in his appearance that we should desire him.

People chose to follow him because of his teachings, and his claims about himself, that were far from superficial.

He taught with authority of his own, regularly hinted at his identity as God. This apparently had nothing to do with the way he looked, the tone of his voice, or the size of his hairdo. No one mentions it int he Bible. It has everything to do with the truth of his words.

Consistency. He made bold claims, but Jesus was absolutely consistent in living them out. Scour the Sermon on the Mount, and see if you can find any occasion where he contradicts his words.

He said to pray in secret. While praying to his Father, he went away, sometimes to a garden, to be alone.
He said to turn the other cheek. While being arrested, told his friend to put down his sword and let it happen.
He said, love your enemies. While hanging on a cross, said “Father forgive them”.

His words were also consistent with God’s word throughout centuries.

He told us in the Sermon on the Mount he was the fulfillment, not rejection, of the Old Testament law. God hadn’t changed his mind, God wasn’t wrong, God was fulfilling his purposes in Jesus.

He regularly quoted the Old Testament law, and then got right to its core – the heart change that went beyond fearful obedience.

His words are consistent with the lives of his followers. He never promised we’d be millionaires, drive Cadillacs, or never experience pain or sorrow in this life…like some false teachers will claim to get your money or devotion.

He did promise that he’d bring about a kingdom far better, and invited us to follow him there, taking up a cross.

He was definitely not short lived. He is still worshipped today. Jesus rose from the dead, and still lives today, both reigning over the universe and living in the hearts of those who follow him. 2000 yrs on, the words of the Sermon on teh Mount are revered the world over…and have brought life to those who’ve not just revered them, but lived by them.

The Church exists because he and his teachings were not short lived, but of eternal value. By following him, our lives can be transformed

Motives. After all his teaching and healing, he died on the cross for us. There was no benefit for himself, except that he would close the separation between us and God. He had our best interests at heart.

If you have found teaching of false prophets lacking, urge you to test Jesus. Not just those who claim to represent him, for good or ill, but test Jesus himself. Read his words, if find him attractive not in a flashy superficial way, but rather find that he satisfies your deepest yearnings.

Invite him to be your teacher, become his disciple. Then experience his risen, eternal life and its transformative power in your life, consistent with all he taught.

If you’ve never experienced that, and you’ve been accepting less, then my hope is that you’ll try the real thing.

Challenge: Who has been a positive spiritual influence in your life? You should spend more time together, set up coffee, phone call or lunch with them! Who can you influence in the same way? Set up time with them, too.