Thursday - Act On It - Knowing 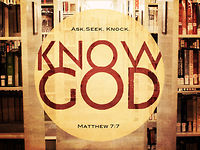 So far this week, we’ve seen that Christian faith is not about just the words you say, and not just about deeds you do.

If it were, then Christian faith would be like trying to get to know a celebrity – you would either be guessing the right passcode to get through their mansion gates, or you’d be trying to hop the fence.

It would be easy to know about the celebrity, and never really know them.

But thankfully, God is not like a celebrity who keeps a safe distance from his fans.

In Jesus, God came to earth. He didn’t have to, but he passed through those gates into our world and made it possible for us to know him personally.

God took on human flesh, clothed in the way people were clothed in first century Israel, and spoke their language.

We can actually know God, who came to earth in Jesus, and is active today through his Holy Spirit. Even though Jesus died and rose and since returned to heaven, we can still know him by studying his words, communicating with him in prayer, and with the community he calls his body on earth – the church. Like the one we are forming in Ajax in Durham Region just East of Toronto.

The saying is true: it’s not about what you know, or do, it’s about who you know.

Who you know, will then affect what you say and do.

Words and deeds are important, but are no substitute for the full picture of life in God’s kingdom given in the Sermon on the Mount.

It’s about actually following who you say you follow. Inviting him to transform life…not just saying he does.

The aim is to have him transform our hearts, so they look more like his.

How do we know? That’s what Jesus has been teaching all through the Sermon on the Mount. He’s been describing what God’s heart looks like, and wants your heart to look like, so that it transforms the rest of your life. The health of your actual heart matters – blood passes through to all areas of the body.

An unhealthy heart means unhealthy life. No matter how healthy you appear, you aren’t healthy if your heart is hurting.

God wants to transform the heart of our lives, so all other areas of life get healthy.

And he warns us that starting with our words and actions will result in failure.

It starts with openness to Jesus…a willing submission to his will.