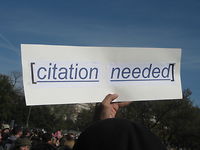 Researchers like her live and breathe citations. It’s critical that they learn how to quote someone properly. There are whole books written about referencing sources properly.

Good teaching in Jesus’ day was the same. Rabbi Hirschel says this. Rabbi Hillel says that. At best, a good teacher might come up with some creative parallel, paradox or new insight into those ancient words.

But to say something original, that was risky. Maybe you could get away with it at end of your career, or maybe after you’d died, people would say it about you.

The Jewish people have such a long history – to make up your own stuff was as if you thought you were better, and could ignore the past.

If you did, people would ask, “Who is this guy?” In this case, he was Jesus, a carpenter from a small town. He never went to the advanced schools of Judaism. Lucky he was literate.

Yet, everyone, even his enemies, saw this profound, original teaching in Jesus. They said the same as these crowds. “He teaches as one with authority” meaning he wasn’t quoting the great teachers of the past, like other Jewish Rabbis always did. He just taught, and people recognized his words as good and true, despite his lack of citations.

He hadn’t followed another rabbi, he just gathered a school of students around him.

He doesn’t need to cite, because he is the source of all truth. He is called the “Word” of God – the “Word” being a Greek concept of the truth with personality.

Question: How is Jesus different from other teachers in your life? What did he teach that no one else said before, or has ever improved upon since?

We meet for coffee every Wednesday night at Starbucks in the Chapters Store in Ajax, in Durham Region just East of Toronto. Maybe we’ll see you there?