A very brief exploration of whether faith, science and reason are at odds.

Question: Do you have doubts about faith, science and reason? Do you ever doubt those doubts? Why?

The last big question we need to consider is: Does God Exist?That’s huge!

We cannot conclusively prove that God exists, and we are not trying to.

Beware those who claim to conclusively prove one way or the other.

We can prove things within our world using empirical scientific methods.  Those methods work by repeating the same experiment enough times that you can infer it will happen forever.

You can’t expect to do that with the one who created the world, its scientific methods, and ourselves.

You can’t analyze the creator of science, using science.

I simply say that so you know to beware – God has not been disproven – despite what some may claim.

We try to be humble and honest here – no one can prove God exists – but those who claim he doesn’t exist are often quite forceful about it.

The problem is that any supposed disproof rules out itself – if there is no God, and everything is the result of random coincidences, then our sense that the world is reasonable, predictable, moral, etc. is just an illusion, and so our scientific method built on that basis would be completely unreliable.

A better way to think about it is that science describes how the world works, and God’s story is about why the world exists in the first place.

Dietrich Bonhoeffer, a Christian pastor who tried to maintain his faith in Nazi Germany, once said this: A god who let us prove his existence would be an idol.

An idol is simply a god we make ourselves, to use, rather than a God who made us.

Asking whether we can logically or scientifically prove or disprove God is the wrong question, anyway. 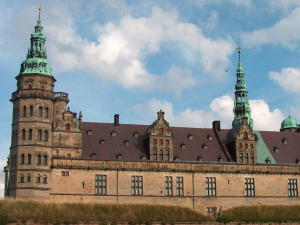 There is a story that illustrates this, from the early days of space exploration.  A Russian cosmonaut returned from space, saying he had not found God.  CS Lewis, a great Christian author, said that his claim was like Hamlet, a character in a play written by Shakespeare, going to his castle’s attic and looking for Shakespeare himself.

This brings us back to our six act play…if we are indeed characters in this play, then the creator is not an object on stage, in the attic, on the clouds, or somethingwe can know anything about, unless he chooses to reveal himself in the play.

God revealing himself in our world, writing himself into the script, is the whole point of the Christian story, and something we get to next time.

For now, we hope that if you came certain that there is no God, then at a minimum you are doubting a few doubts, and open to exploring this God further, to see if his answers fit your questions.

We hope he’ll come to life for you through that process, and engage your intellect and heart at the same time.

Do you have doubts about faith, science and reason?  Do you ever doubt those doubts?  Why?