We look at who humans are created to be - creatures in a particular relationship with God, with particular characteristics given to us “in his image”.

Question: How are humans so different from other creatures? To what do you attribute these differences? 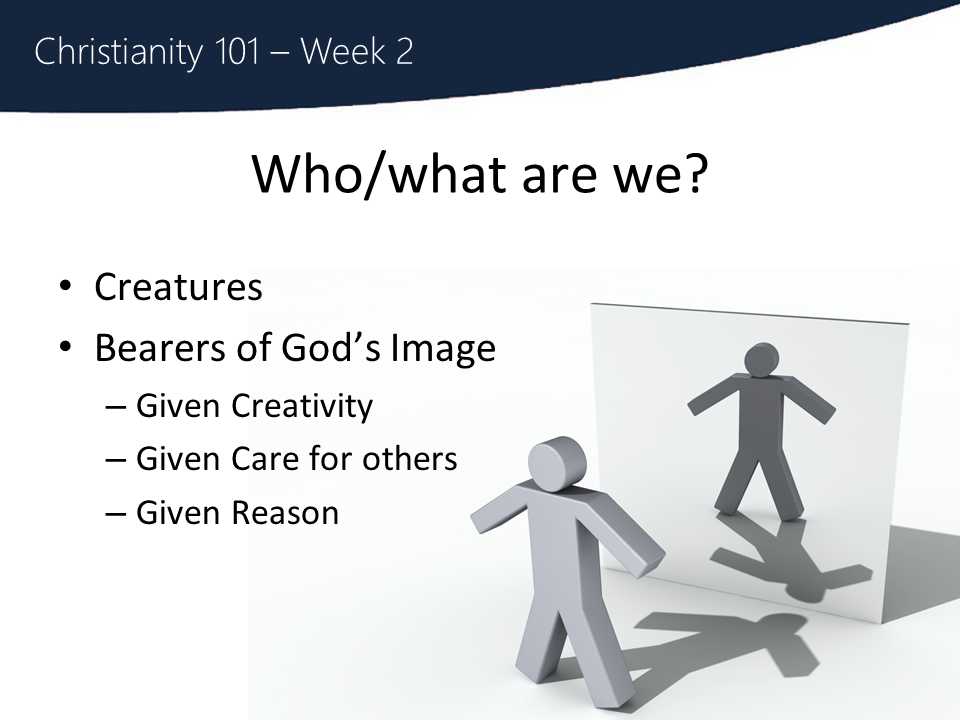 We look at who humans are created to be – creatures in a particular relationship with God, with particular characteristics given to us “in his image”.

Who are we, and why are we here?

In some ways – today we’re looking at “What is the meaning of life?” but that seemed like too ambitious of a title!

We were put together from matter – the Bible describes us as being made from dust!

The obvious consequence is that we are not God…even though we may act like we are!

This is a good thing – I know I’ve messed up enough times that the world would be in serious trouble if I was God.

Now, although we are not God, the Bible says God created us in his image.  There are some of his own characteristics that he’s given humans.

Creativity – We can see this in the way that humans have built culture, science.  In how we never seem to exhaust our curiosity about ourselves, our world, and our creator.

God the world from nothing, and then made us, and asked us to care for his world.  Now we have this incredible ability to reorganize some of the things he’s created, to make art, technology, and more.

We’ve also been given care for other created beings.

Humans have a peculiar sense of care and responsibility for other creatures that other animals don’t seem to have.

It’s something the Bible says God created us to do!

But there is more – we long for community.  We long not to be alone.

Can see this at its most basic in how having someone near us in the dark makes it feel much better, but it’s also behind our quest for love and companionship in this world.

This is all because God created us to care for others in community.

We were created to know him and be known by him.

If this is how God is – he longs to care for others, to be in community, then it makes sense that this rubs off on us, too, since we are made in his image.

Finally, we have been given reason –

We curiously look for symmetry, organization, reliability and stability in the natural world.

Why would we expect it to make sense?

A world that arose from random collisions of particles with no guidance would be anything but reasonable or sensible, but we live in a world that is, and we expect it to be so, and need it to be so.

Again, this makes sense if we are made in the image of God.

Since God is the creator of reason, reason is what he does, then it makes sense of why we are the same way.

How are humans so different from other creatures?  To what do you attribute these differences?