One of the most important characteristics of God, that he has given to us, is free will to love God, or not.

Question: What would you change about the world? Why do you think you long for a world like that?

One of the most important characteristics of God, that he has given to us, is free will to love God, or not.

That video illustrates how important it is that we were given free will.

In order for us to have the relationship with God, for which we were created, we needed to have free will.

We discussed this last week, in Act 2 of the six act play.

Real relationships, and love, are based on freedom.

You can’t force anyone to love you, or be your friend.

If you do, it becomes very nasty, very quickly.

And so God chose not to create us like robots, who had to love him back…who had no choice but to be in relationship with him.

To truly love, you have to be free to love or not love, love or hate, know or not know God, accept or reject him.

And God gave us some amount of free will, to love him or not, as well.

We were made not to be true to ourselves, but true to God.

Remember the 6 act play.  We were made to be living by his script, knowing him personally, living in his way.

He’s began with a beautiful script written for this world…a real work of art…that reflected who he is as an artist.

We were made to live by that script, living by the director’s plans.

The Bible tells the story of creation in its first book: the book of Genesis.

In this world, God provided for their every need – food was easy to come by, picking fruit off a tree.

It was good – God said it was good the moment he created it.  He made us to know only good…even though he knew that there was a terrible alternative – evil.  He chose to shelter them from it – they could live under his care and protection, by allowing him to be their God, in all areas of their lives, to have him at the center of their lives.

This means humans are distinct.  We are creatures, animals, mammals.  But that’s not all we are.  We also bear God’s image, have been given responsibility for creation, and are made for a particular kind of relationship with God that no other creature can have.  And even though we bear the image of God, we are not God, but rather something very distinctive.

As you have probably figured out, although this is the world God created, it’s not the world we have today.

Although it is the way we were created to be, this is not who we are today.  We used our free will to make it otherwise, and live in a world where human dignity is trampled, the weakest are not always cared for, and we don’t feel close to God.

This is why cannibalism seems so abhorent, and why we care for the weakest in our population, rather than seeing them as dragging us down.

This is why Christians developed the concept of human rights…believe every human being has a value and dignity to be preserved.

Those are all part of human experience in a messed up world, because we have memories of the real world, God’s world, that we were truly created for.

But it is the world we were made for. 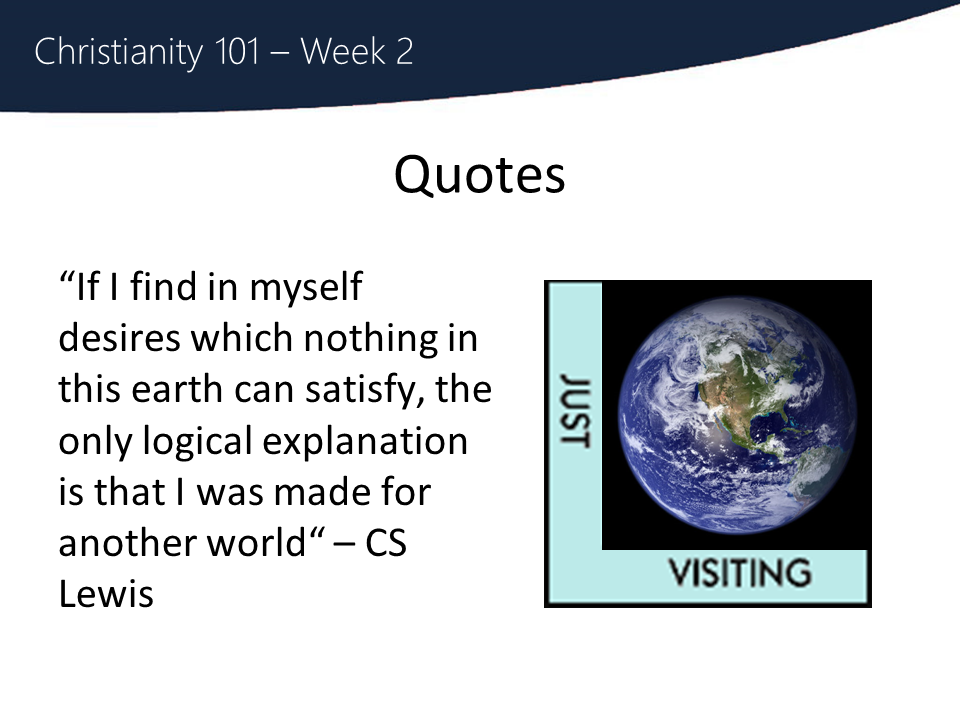 Quote from CS Lewis: “If I find in myself desires which nothing in this earth can satisfy, the only logical explanation is that I was made for another world“

I think this is true.

I have never met anyone completely comfortable with the way things are.

We all have hopes and dreams for a different world, a different life, than the one we inhabit today.

When terrible crimes are committed against our fellow humans, we long for justice.  We long for a world when these things don’t happen, where humans relate to each other with dignity and care.

When loved ones are ill, we long for a time when all diseases are cured.

When that loved one dies, we hate death, long to eradicate death.

But step back – why do we long for such things?

We’ve never lived in such a world, so how do we know it exists, much less that it is worthwhile?

This is because we were made for a different world…and we have a distant memory of that world wherever we go.

Like an animal taken out of its habitat, we are in strange and unknown, even dangerous territory that we were not made for.

What would you change about the world?  Why do you think you long for a world like that?