We briefly explore whether we can trust what we read in the Bible about Jesus. More on how exactly the Bible works and came to exist will follow in later weeks.

Question: Have you ever read some of the Christian Bible before? Did you trust it? Why or why not? What would you trust? 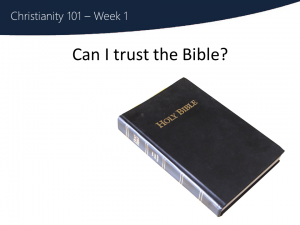 The Bible is God’s way of speaking divine words in human language, through human authors.

Now you may wonder, how can I trust the Bible?

For the sake of time, we can’t get into a lot of depth, but we will take a brief look at the part of the Bible that focuses most directly on Jesus – the gospels or biographies of Jesus.  These are the most often disputed books of the Bible, as some will challenge if it accurately records what Jesus said and did.

We know they wrote these biographies after the death and resurrection of Jesus (about AD 29) and before AD 100. All the books in our NT were written in the first century – when there would have been people still alive who knew Jesus – or at most one generation away from those who knew Jesus – during his earthly ministry.  These books were written too early for legendary, self-serving material to creep in to the accounts – because an eye witness could have easily objected.

Another good question: How do we know that what someone wrote in the first century is what we are reading in the 21st?

We have many manuscripts of the New Testament from very early on – within 3 centuries of the resurrection.  That may not sound like much, but we have more copies of those books than any other historical document, and there are very few human copying errors.   Almost all of the errors that exist are insignificant – word order, grammar, etc.  Less than 1% of variations in Biblical sources have anything to do with Christian teaching…make for fascinating debate about minutiae, rather than outright rejection of the whole thing.

There have been some other books written, that were clearly self-serving, or filled with legends, that were written too late, or rejected by those who knew Jesus’ teachings first or second hand.

Those are a couple quick answers to important questions, but we’ll explore more of how the Bible works, who wrote it, and what role it plays in Christian faith in the course that follows C101, called Following Jesus.

But for now, we’ll explore the Bible as it is, see how God reveals himself there.  That’s why your home work for this course is to start reading the Bible – whatever you have heard, or think about the Bible before, it’s best to know the material first hand so you can make informed decisions!

Have you ever read some of the Christian Bible before?  Did you trust it?  Why or why not?  What would you trust?

Read John 1-2 and write down what you’ve learned about Jesus.