Day 11 - How does God Answer Prayer?  No and Maybe 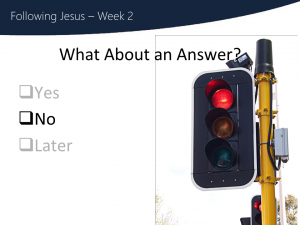 Sometimes God will say no for a variety of reasons.   Our prayers may have the wrong motives, or sometimes we are praying for simply frivolous things.

Imagine praying, “Lord please give us a sunny day for a soccer match”—when the local farmers are praying for rain. Who wins? Innocent children who need fun and exercise, or a farmer whose livelihood depends on rain?

Sometimes God says no because we are requesting what is not good for us, and we can’t even see it. God loves us and knows what it is best for us. Good parents do not always give their children what they ask for. If a 4 year old asks to play with the ginsu knives a good parent says no.

God will answer no if the things we ask for are either not good in themselves, or not good for us, or good for others, either immediately or ultimately. Ruth Graham (Billy Graham’s wife) tells a story “God has not always granted my requests. If he had I would have married the wrong man, several times. Sometimes God says no because of the sin in our lives, our determination to pull away from God. God makes it clear in the Bible that in addition to our private spiritual state, our social concern or lack of it—for the poor, for orphans and widows—also has a direct bearing on how our prayers are received. The prophet Malachi gets very specific. Those who pay exploitative wages, who break marriage vows, who treat illegal immigrants badly, or refuse to provide shelter for the homeless, and the list goes on, all those risk closing God’s ears to their prayers. As a 21st century Canadian, those warnings are very hard to hear.

Sometimes we will not know during this life why the answer was “no”. In the face of those situations we have a choice. We can say “I am going to stop believing because I don’t understand.” Or we can say “I am going to go on believing in spite of the fact that I don’t understand.   I am going to trust God, even though I don’t think I will ever understand—in this life—why it happened. But I trust that God might actually know more about life, the universe and his plans than I do.” There may be times when we will have to wait until we meet God face to face to understand what his will was and why the answer was not what we hoped for. 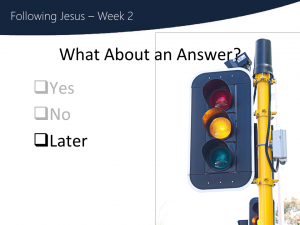 Sometimes, prayers are answered with “Later”. Later is of course a combination of Yes and No. Yes, but not now. Or No for now, but yes later. And of course at the time, you won’t know whether it is a no, or a later. Only time will tell.

In some ways, even Jesus had prayers that fell into that limbo. His longest prayer, recorded in John, centers on a request for unity, “that all may be one.” The slightest acquaintance with church history shows how far that prayer remains from being answered. Of course, since this is God the Son praying to God the Father, and they are one, it has to happen. But not yet.

Sometimes no and later can in hindsight be a great blessing. By answering every prayer Yes, God would in effect abdicate, turning the world over to us to run. He would hand over the keys to the universe, and let us drive. History shows how we have handled the limited freedom granted to us: genocide, wars, polluted the earth, concentrated pockets of wealth and grinding poverty. Imagine if we could tell God what to do with the entire universe!

Country singer Garth Brooks had a hit song in which he recalls him impassioned prayers for God to melt the heart of a high-school sweetheart—later apparent to him as a terrible choice. Just because he doesn’t answer doesn’t mean he don’t care. Some of God’s greatest gifts are unanswered prayers.

Even after spelling out where we can go wrong in our prayers, and why God says Yes, No and Later, I want to make it clear that prayer does not work according to a fixed formula; get your life in order, say the right words and the desired result will come.

Between the two questions “Does God answer prayer ?” and “will God grant my specific prayer for this sick child or this particular injustice ?” lies a great pool of mystery.

Question: When have your prayers been answered with a “no”, “later” or “maybe”?